The History Of E-Cigarettes From Invention Until Now 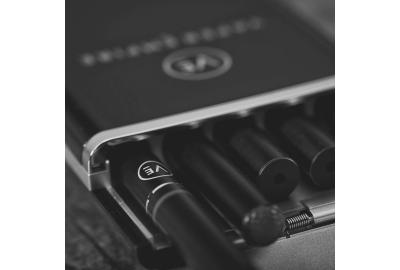 By Vaper Empire
No comments
E-cigarettes may have only hit the mainstream during the 2010s, however, their history stretches back much further than this.

Today, e-cigs are used for many things and have a global following. From people who use e-cigarettes to help them quit smoking to those who use e-cigs just to be part of a community of likeminded people.

Although e-cigs have had a turbulent history and were met with a lot of resistance in their earliest days, they are a much-loved and commonly used piece of technology today.

The actual ‘origin’ of devices and ideas that resemble the modern cigarette is disputed, however, it is generally agreed to be either Joseph Robinson’s 1930 patent or Herbert A. Gilbert’s 1965 patent.

Joseph Robinson made the first documented reference to an e-cigarette in his 1930 patent that was filed in 1927. This was never manufactured or commercialised though, and it is not known whether a prototype of Robinson’s very primitive device was ever created.

The first smokeless, non-tobacco ‘cigarette’ device was actually Herbert A. Gilbert’s of Pennsylvania, which was patented in 1965 but originally filed in 1963.  Gilbert’s non-tobacco cigarette was thought by many to be a safer and relatively harmless method of smoking because it replaced the burning of paper and tobacco with the heating up of moist, flavoured air. Just like with Robinson’s patent, Gilbert’s was never commercialised.

It wasn’t until 1979 when another attempt was made at creating the e-cigarette as we know it today. Phil Ray, one of the earliest computer pioneers, worked with his personal physician, Normal Jacobson, to create the world’s first commercialised variation of the e-cigarette.

Although it was not an electronic cigarette—rather relying on the evaporation of nicotine—the duo performed the first known formal and recognised research in the field on alternative methods of nicotine delivery. Their device, however, was not a promising method of delivery and it never reached major retailers.

While their device was a dead-end, the duo did coin the term “vape” which is used today.

Finally, we began to see what would eventually become the first commercially successful e-cigarette. Created in China by Hon Lik, a 52-year-old pharmacist and inventor, he created his e-cigarette device after his father, a heavy smoker, died of lung cancer.

The company that Lik worked for, Golden Dragon Holdings, helped develop the device and changed its name to Ruyan, which translates to “like smoke”.

Finally, in 2006, e-cigarettes were introduced to Europe and then the U.S., with the earliest import ruling available being dated August 22, 2006. This can be found on the U.S. Customs and Border Protection website database. The ruling reference for this is for a “nicotine inhaler and parts”, also known as an e-cigarette, unofficially.

After its introduction to Europe and the U.S., the e-cigarette really started to catch the attention of national governments and agencies.

In March 2008, Turkey’s Health Ministry suspended the sale of e-cigarettes, citing that they are just as harmful as real cigarettes. Kiyas Güngör, a Turkish official, famously went on record to say that “nicotine is the most dangerous element among 4,800 poisonous chemicals in cigarettes.” We assume that he later regretted these words, though!

Then, in September of the same year, the World Health Organisation proclaimed that the e-cigarette should not be seen as a legitimate smoking cessation aid and that marketers should immediately remove any such claims from their materials.

Some other notable events towards the back end of the 2000s included:

It was not until the 2010s when e-cigarettes started to be recognised for what they truly are---legitimate and safe devices for the quitting of smoking. This was helped in part by the growing popularity of vaping and the community surrounding it, which raised awareness. In October 2010, the world’s first ‘VapeFest’ was held in the UK and continues to be held as an annual event.

In February 2011, a study was published in the American Journal of Preventive Medicine. This reported, for the very first time, that e-cigs are a legitimate and promising tool to help smokers kick their habits and quit for good. Their study demonstrated six-month smoking abstinence rates that were better than those for traditional nicotine replacement therapy products of the time, such as nicotine patches and gums.

In October 2011, a report from the British Cabinet Office said that tobacco harm is reduced by e-cigarettes in its first annual report. E-cigs were also cited as a potentially effective substitute for e-cigarettes. The first-ever e-cig clinical trial, also held in October, reported in the BMC Public Health journal that e-cigs may be more effective for helping smokers quit than other nicotine replacement products.

Despite this research, countries still continued to heavily restrict e-cigarettes. In Argentina, they were banned in May 2011 and in the Netherlands, their sale and importation were banned in December 2011.

This was met with backlash by the vaping community. More and more vape-related events, such as VapeBash in Chigaco, were held around the world, and consumer groups organized the world’s first World Vaping Day in March of 2012.

Over time, legislators began to take note. Four U.S. Representatives---Henry Waxman, Diana DeGette, Frank Pallone Jr., and John D. Dingell---wrote to the FDA demanding that the Obama administration issue new rules on cigars and e-cigs. This was followed up by a letter from the National Association of Attorneys General urging the issuance of reformed regulations.

In November 2013, the first E-Cigarette Summit was held at the Royal Society in London. This summit was designed to be a platform for the presentation and scrutinization of available science and evidence on e-cigs, with the goal of informing public health authorities and policymakers.

2015 and Beyond, Notable Events

Lots and lots of regulatory changes and worldwide events took place in the 2010s as vaping truly took off. While the 2010s started with e-cigarettes being heavily regulated against, research, studies, and awareness changed public perception. Regulators and legislators, now with more information and undeniable evidence, began to back down and take a more relaxed approach to e-cigarettes.

Today, e-cigarettes are, for the most part, completely legal to import, buy, and use in many countries worldwide. With more and more studies taking place now than ever before, health authorities are beginning to truly understand e-cigs and are better equipped to provide reliable guidance to government authorities and consumers.

There are still a few countries that don’t allow the sale of e-cigs, one of which is Australia.

The Legal Situation with E-Cigs in Australia

As we have mentioned before on the Vaper Empire blog, Australia has some peculiar restrictions when it comes to e-cigs.

Australia has a famously tough stance against smoking cigarettes. This is because cigarettes contain nicotine, and nicotine is scheduled as a dangerous poison in Australian law. As a result, the sale of any nicotine-containing products, including e-cigs and e-cig juices that contain nicotine, is banned throughout the entire country.

You might be thinking “But I can buy cigarettes…” and you’re right, you can. That is because cigarettes are an exemption to the law. E-cigs and nicotine-containing e-cig juices are not. Fortunately for Australia's vapers, this does not mean that e-cigarettes and e-juices with nicotine in them can't be purchased by adult Australians. The fact of the matter is that they can be purchased, just not in any local stores in Australia.

Getting Nicotine E-Cig Products in Australia

Although you cannot buy nicotine-containing e-cigs and e-cig products anywhere in Australia, you can import them for personal use.

One place you can buy e-cigs in Australia is by visiting the Vaper Empire online store. We design, manufacture, and sell a range of our own custom-made products. From basic e-cigs to powerful vape mods to a huge range of never-before-seen nicotine e-liquid flavours, there is no better place to shop for Australian consumers who are looking for high-quality e-cig products.

If you are going to buy from our online store, however, there are two points to note:

What constitutes a ‘three-month supply’ has not been defined by Australian officials and is open to debate. As a guide, we recommend buying no more than 1,000ml of nicotine-containing vape juice per order. This will last most people longer than three months, anyway.

The Benefits of E-Cigarettes

There are several benefits to using e-cigarettes instead of smoking traditional, cancer-causing ones. These include:

These are just a few of the many benefits that are associated with e-cigarettes. There is no reason why any smoker cannot quit their expensive, dangerous, and stinky smoking habit with the help of a cheaper, cleaner alternative.

Ready to Make the Switch to E-Cigs?

So, you have now read about the history and the many e-cigarette benefits. With this information in mind, are you ready to get on board?

Whether you are taking up vaping for the social aspect, because you are trying to quit smoking, or some other reason, our range of vaping devices, vaping accessories, and e-liquids, including handy and value-packed starter kits, will get you off to the very best start.
5 February 2020
Comments